It is always good to attend networking events as you never know who you might met.  It was a delightful evening arranged by VisitYork and hosted by the Royal Station Hotel in York recently.  The Royal Station has recently had £20 million pounds invested into it and it was very glamorous decked out for Christmas. The hospitality of the Hotel was very, very generous and if we hadn't yet got into the spirit of Christmas we certainly had by the time we left.
Amazing cocktails and food  which would have come out of Nick Evans kitchen. The restaurant is aptly named The Refectory and already getting rave reviews-along with been named last week by the Red Spotty Hanky as one of the top 15 places to eat in York .Also to get mentions where The Star Inn the City -Andrew Pern's urban baby and The Park Restaurant at Marmadukes run by Adam Jackson. Great to see this was such a  positive move for Adam as his food is delicious .
Interesting people amongst them so I had met before and some new faces. I was pleased to be introduced to Mr Bishy himself- Johnny Hayes who was the mastermind of Bishopthorpe Road becoming the Winner of  Best Loved Parade of Shops and Great British High Street of the Year. We sat talking and know there are so many good people out there wanting to make the world a better place and not been greedy. We both agreed 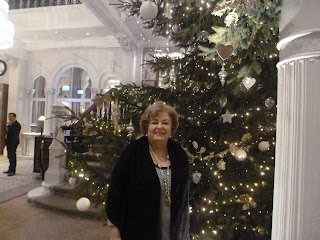 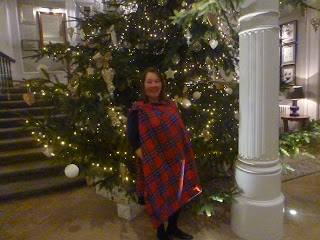 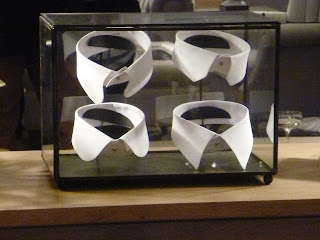 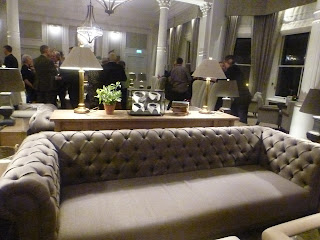 people can get far too short sighted and clearly there is a far bigger picture to paint.  I went along with Anne Ma'aye who runs Network York within the City of York . Anne has always been a great supporter of everything I do and it was lovely to catch up with her.
Towards the end of the evening a lady said why on earth would those collars be put in a display. My thought was what a great idea  to show "men" from all walks of life could wind down here . All would be welcome, cast the cares of their working day away and enjoy the splendid offerings - I think this sums up the Royal Station Hotel perfectly. I just wonder if this is the same thought mode as what the London designer who create this space had when they put them there.